So The New Camera
Went To A Concert!

You may have seen my last post of the Sea Lion where I took my new camera out into the wild for the first time. Well, it got even wilder at a concert this past weekend.

It was my friend Regan’s birthday Friday. The George Michael and Wham tribute band, Careless Whispers, performed at The Concert Lounge in Riverside, California. George Michael is one of Regan’s favorite performers – wait… I believe it is his favorite – so he asked if I would take some pics of the tribute band. Careless Whispers also had a very special guest playing with them, Deon Estus. He’s an original member of the band Wham and played bass for the group. So it was kind of treat if you’re a Wham fan.

Below are just a few pics…

I took a lot of time researching the camera to make sure that I wanted to drop a pretty penny on it. And while the camera’s been out for over a year now – ancient in the fast moving world of technology – I’m very pleased with the Sony A7iii. It came with decent kit lens. I also picked up the Sony 35mm F1.8 lens. After having owned a few cropped-sensor units, this is my first full-frame sensor cameras. It’s kind of a step up.

The Sony A7iii known for its tack sharp focus and its ability to focus on faces and eyes. And when the settings are right, it does a brilliant job.

Just one thing… I just forgot to set up the camera correctly for a concert event.

Before I go on, Happy Birthday, Regan!

There is always going to be low light at a venue like this. So I’ll want a lens that lets in as much light as possible and that can trigger pretty quickly. I had the f1.8 which lets a good amount of light in. I also had the kit lens with me, a 24-70mm zoom which starts at f4.2. This f-stop isn’t that great for low light situations. But it’s a zoom lens, so I could get closer pics from further away.

What I failed to do, though, was ensure that the camera was triggering at faster speeds, referred to as shutter speed. Think of it as how fast the camera was “clicking”. Unfortunately, I forgot to set this adjustment to a faster “click”. So while I was a lens with a big f1.8 opening, as my camera was adjusting for the lighting conditions, it shot at speeds of 1/40 to 1/50 of a second most of the time. Not very good for handheld operation. A decent camera operator can hold a camera and let the speed click of about 1/60 to 1/120 of a second without showing too much movement and blur. But 1/40 and 1/50 means that it’s shooting a slower to let enough light in, which also means that any sort of movement will cause the image to look shaken or blurred. Speeds under 1/60 of a second usually causes images to look out of focus.

The fix should have been to adjust the shutter speed to stay at around 1/60 – 1/120 as a minimum, allow the 35mm lens to remain at f1.8 and the kit lens to stay open as much as possible. Then the camera would do its digital magic and change only the ISO (often referred to as film speed) to whatever amount that it calculated as proper exposure. These cameras can shoot ranges from 100 ISO to as high as 51,200 ISO. That last number is crazy and it means that it can shoot in extremely low lights. The problem though, is that once you start getting over 4,000 to 8,000 in ISO, the image begins to look like it’s grainy and has a lot of extras “dots” and “scratches” in the images. You still get a properly exposed image – the lighting looks right, but the quality of the image looks poor at anything typically over 10,000 ISO. I prefer to keep my images around 100 – 800 ISO and will be okay with 4,000 when I really have to.

However, if I left the lens at f1.8 and set the speed to 1/120 of a second, the camera would have calculated anywhere from 100 to around 10,ooo and my Adobe photo editing software could have cleaned all the extra grain and dots.

But because I forgot to set the camera to manual and the shutter speed to at least 1/120 of a second … or even 1/60 of a second, the camera still calculated the ISO on its own but also set the speeds to 1/40 most of the time.

So out of about 200 clicks that night, I only got around 15 images that were both in focus and well lit.

At least that’s what I think.

What do you think? Please let me know in the comments below. I’d love to get your input.

I’m glad that I have a great full-sized sensor camera and that I have a really good lens to help me take images with better image quality. Yet, I do agree with the pros:  it’s not all about the equipment that makes the image, it’s the photographer’s ability to tell a good story and to work well with the tools at his disposal.

I look forward to several years of learning with the Sony A7iii and to taking some great pics along the way.

And by the way… If you ever get a chance, be sure to check out the tribute band, Careless Whispers. They’re a lot of fun! Click Here for Info… 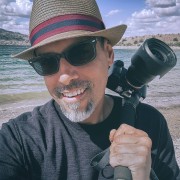 Pay Off College While Having Some Fun!